The Importance of Diversity in Women’s Literature 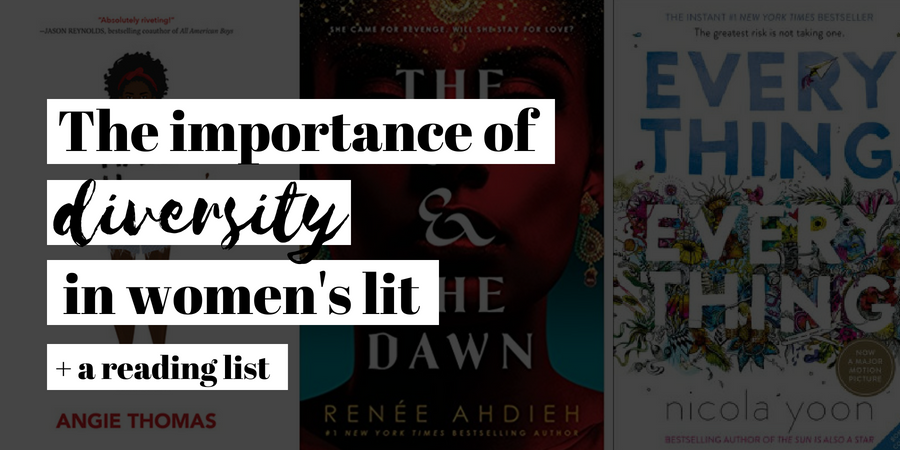 Do you want to know the first Hispanic character I’ve ever read that wasn’t a stereotype? I can remember the instance clearly, because—sadly—it only happened recently.

When I was in high school, I remember I was a huge fan of the CW’s The Vampire Diaries (yup, that happened). At the beginning of each episode, I’d notice the attribution to L.J. Smith’s book series of the same name, and I liked the show so much I thought, “What the heck, I’ll read the books too!”

I picked up a ratty copy from my school’s library, and when I got home that day, I went straight to my room to start reading. I remember feeling bewildered by how different the book series was from the show, but more clearly I remember my attention being caught by one of the main narrators Meredith Sulez.

See, she wasn’t like the other Hispanic characters I’ve read who dropped random Spanish words into their speech, or were undocumented children of migrant workers, or embodied the sexy/spicy Latina trope.

Meredith Sulez was not here for that. None of these repeated tropes are wrong, but they aren’t my experience. They always felt flat and onesided. But Meredith was something else. She was wry, elegant, level-headed and could kick some serious vampire ass.

I was struck by how dynamic she was as a character.

Just remembering the moment when Meredith identified herself as Puerto Rican still fills me with unbelievable joy. I’m Puerto Rican, and that was the first time I saw that aspect of myself reflected in a fictional character.

Looking back, I realize how lonely I felt. I was in high school when I finally found a character I could connect with. High School! After this experience, I felt a little betrayed. Books had always been a source of comfort and connection; but once I realized what was missing in my relationship, I couldn’t help but notice the lack of diversity every time I picked up a novel.

It wasn’t just that there were no Hispanic characters, but there were also no Asian, Black, Native…the list is endless. The few times I did find books with some diversity, there were only one or two characters, and they were often very stereotypical.

After a while, I started to realize how it just wasn’t bothersome, but completely unrealistic. How can authors create a complete fantasy world, with dragons and unicorns, but not with any dark-skinned race? It’s almost laughable if it weren’t sad.

The discussion about representation in literature has made me realize that I wasn’t the only one who went through this. I’m sure there were plenty of other kids who were stuck in schools and classes where they were the only ones who weren’t white.

At first, I tried to be nice about it. I would simply say I can’t enjoy a story if it has only so many characters of color. Now, I’ve learned to speak my mind about these things and be unapologetic. If books are champions of inclusion, then include some dang people of color. Not as sidekicks, but as protagonists.

If you’re ready to be a champion of diversity, I’ve shared some of my favorite books that feature strong, inclusive protagonists. Do you have any recommendations yourself? Leave them in the comments!

The Wrath and the Dawn by Renne Ahdieh

In a land ruled by a murderous boy-king, each dawn brings heartache to a new family. Khalid, the eighteen-year-old Caliph of Khorasan, is a monster. Each night he takes a new bride only to have a silk cord wrapped around her throat come morning. When sixteen-year-old Shahrzad’s dearest friend falls victim to Khalid, Shahrzad vows vengeance and volunteers to be his next bride. Shahrzad is determined not only to stay alive, but to end the caliph’s reign of terror once and for all.

Everything, Everything by Nicola Yoon

My disease is as rare as it is famous. Basically, I’m allergic to the world. I don’t leave my house, have not left my house in seventeen years. The only people I ever see are my mom and my nurse, Carla. But then one day, a moving truck arrives next door. I look out my window, and I see him. He’s tall, lean and wearing all black—black T-shirt, black jeans, black sneakers, and a black knit cap that covers his hair completely. He catches me looking and stares at me. I stare right back. His name is Olly.

The Hate U Give by Angie Thomas

Sixteen-year-old Starr Carter moves between two worlds: the poor neighborhood where she lives and the fancy suburban prep school she attends. The uneasy balance between these worlds is shattered when Starr witnesses the fatal shooting of her childhood best friend Khalil at the hands of a police officer. Khalil was unarmed. Soon afterward, his death is a national headline. Some are calling him a thug, maybe even a drug dealer and a gangbanger. Protesters are taking to the streets in Khalil’s name. Some cops and the local drug lord try to intimidate Starr and her family. What everyone wants to know is: what really went down that night? And the only person alive who can answer that is Starr.

Everyone in Shaker Heights was talking about it that summer: how Isabelle, the last of the Richardson children, had finally gone around the bend and burned the house down.

An Ember in the Ashes by Sabaa Tahir

It is in this brutal world, inspired by ancient Rome, that Laia lives with her grandparents and older brother. The family ekes out an existence in the Empire’s impoverished backstreets. They do not challenge the Empire. They’ve seen what happens to those who do.
But when Laia’s brother is arrested for treason, Laia is forced to make a decision. In exchange for help from rebels who promise to rescue her brother, she will risk her life to spy for them from within the Empire’s greatest military academy.

The Lunar Chronicles by Marissa Meyer

Sixteen-year-old Cinder is considered a technological mistake by most of society and a burden by her stepmother. Being cyborg does have its benefits, though: Cinder’s brain interference has given her an uncanny ability to fix things (robots, hovers, her own malfunctioning parts), making her the best mechanic in New Beijing. This reputation brings Prince Kai himself to her weekly market booth, needing her to repair a broken android before the annual ball. He jokingly calls it “a matter of national security,” but Cinder suspects it’s more serious than he’s letting on.

Children of Blood and Bone by Tomi Adeyemi

Zélie Adebola remembers when the soil of Orïsha hummed with magic. Burners ignited flames, Tiders beckoned waves, and Zélie’s Reaper mother summoned forth souls.
But everything changed the night magic disappeared. Under the orders of a ruthless king, maji were killed, leaving Zélie without a mother and her people without hope.
Now Zélie has one chance to bring back magic and strike against the monarchy. With the help of a rogue princess, Zélie must outwit and outrun the crown prince, who is hell-bent on eradicating magic for good.

To All the Boys I’ve Loved Before by Jenny Han

What if all the crushes you ever had found out how you felt about them… all at once?
Sixteen-year-old Lara Jean Song keeps her love letters in a hatbox her mother gave her. They aren’t love letters that anyone else wrote for her; these are ones she’s written. One for every boy she’s ever loved—five in all. When she writes, she pours out her heart and soul and says all the things she would never say in real life, because her letters are for her eyes only. Until the day her secret letters are mailed, and suddenly, Lara Jean’s love life goes from imaginary to out of control.

Isabelle is the Poetry editor and Social Media coordinator for Capulet Mag. She works full time at a mind numbing desk job, and spends her off time writing, podcasting, and crusing Yelp for new places to eat.